A giant humanoid monster with a single eye set in its forehead.

Cyclopes are a species of large, intelligent, single-eyed semi-megabeasts. They inhabit caves and may attack your fortress once it reaches a certain amount of wealth.

When assaulting a fort, cyclopes will destroy buildings and pummel any dwarven civilian unlucky enough to get in their path into mush. Their only weapon is their brute strength, as they possess no natural combat skills and lack the immunity to stunning possessed by the equally-large ettin, with a well-trained military easily being able to knock a cyclops down and cause it to give in to pain before it can retaliate. They should not be underestimated, however, as they will easily tear their way through unskilled recruits.

Despite their huge size, cyclopes can be easily captured by a cage trap; however, due to the weight of the cyclops, your dwarves will haul the cage very slowly. While quite harmless inside a cage, a cyclops can prove extremely fun if released inside your fortress. Since they are intelligent, dwarves will not train or butcher them, limiting their use to live training or decorating the fort by placing them somewhere to your liking. 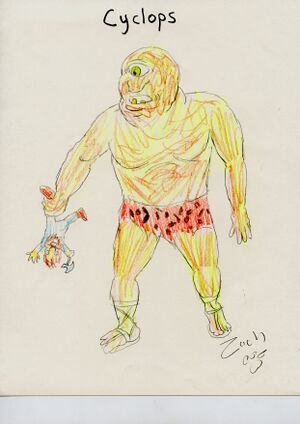 A cyclops, drawn in crayon by Bay 12 Games.