A huge monster the shape of a honey badger. It is ferocious in combat.

Despite their status as giants, reputation for being ferocious in combat, and propensity for becoming enraged, giant honey badgers aren't all that dangerous to anything more than a couple lone civilians, being easily beaten by any military dwarf or small group of dogs.

Some dwarves like giant honey badgers for their great size, underground communities and stripes faces.

Especially because this thing is a giant, the giant honey badger still don't care. 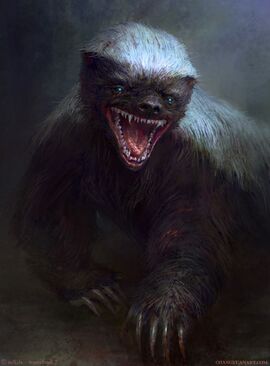