A gigantic creature resembling a human, almost unparalleled in size.

Giants are massive fanciful creatures resembling oversized humans, and the largest of all semi-megabeasts. They inhabit burrows and will attack fortresses once a certain amount of wealth is accumulated. Female giants are known as giantesses.

When assaulting a fort, giants will destroy buildings and pummel any dwarf civilian unlucky enough to get in their path into mush. However, they are less of a threat than the likes of an ettin or a minotaur, due to lacking their immunity to stunning, and proficiency with weapons, respectively. Giants are intelligent creatures but do not naturally possess skills, and also only learn them at half the rate of a civilized creature, meaning their only real weapon is their brute strength. That being said, giants are still the largest of their semi-megabeast kin and should be dispatched accordingly.

Despite their huge size, giants are as vulnerable to a cage trap as any other creature. Since they are intelligent, dwarves will not train or butcher them, limiting their use to live training or decorating the fort by placing them somewhere to your liking. 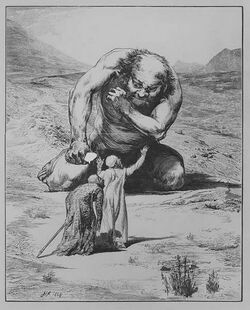 Dwarf Fortress giants do not herd mammoths, nor do they make mammoth cheese. They also lack the ability to smash their foes a million feet into the air, nor are their toes (always) easy for the taking once they die. Contrary to popular belief, giants do not live at the top of beanstalks.