A strange crystalline creature the shape of a man. It is found deep underground.

Amethyst men are an extremely rare type of anthropomorphic creature made of solid amethyst, essentially gemstone golems, found only in the deepest caverns. They are non-sentient, aggressive construct creatures that are not alive, feel no pain, feel no fear, cannot be stunned, do not need to breathe, have no thought center, and are type two building destroyers. They are as large as humans.

Amethyst men are decent fighters and will almost certainly kill unarmed civilians, as normal punches and kicks will merely glance away from their rocky hides. However, an equipped military will make short work of them, with bladed weapons like short swords and battle axes being preferable over war hammers; while a hammerdwarf can bash an amethyst man until its body is fractured and crushed, an axedwarf will be able to sever their limbs much faster. If feeling creative, amethyst men can also suffer from a long fall, a cave-in, or magma. Upon death, they leave a rough amethyst gem usable by your jewelers. They can't be spawned in the object testing arena. 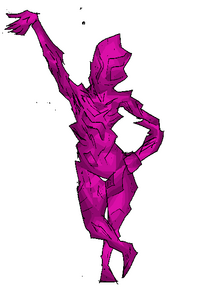 Admired for its rockiness.
Art by Fault

Amethyst men are known to be created in vast caverns stripped of all life, and may be found near garnet, pearl, and rose quartz. They wield amethyst-studded whips in battle.