A small wolf-like scavenger. Normally found in pairs, jackals can form packs when they find a body.

Jackals are very rare animals found in a number of tropical biomes, where they appear in groups of anywhere between a single to five individuals. While carnivorous, jackals are half the weight of the average dog and should only be a threat to your smallest domestic animals. They possess thick fur which provides them with increased insulation compared to most other animals. A newborn jackal is called a pup.

Jackals can be captured in cage traps and trained into low-value exotic pets. Their small size means they provide little returns when butchered, which combined with their rarity makes them poor targets for a meat industry. However, products made from jackal parts are worth twice more than those made from common animals.

Some jackals have been seen standing on their hind legs and wielding *Ademantine* shields. Unfortunately, the only way to kill said jackals, is by shooting their hands with a very "futuristic" crossbow. 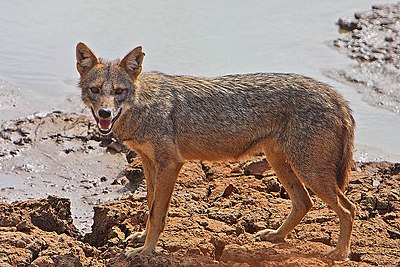