A spotted person with the head and tail of a leopard.

Leopard men are animal people variants of the common leopard who can be found in savage tropical regions and deserts. They spawn in groups of 1-5 individuals and are generally content to keep to themselves. In terms of size, they are the same weight as the average dwarf.

Like other savage animal people, they can join civilizations, become historical figures, appear as visitors and be playable in adventurer mode. Leopard men are able to wear dwarf-sized armor and clothing, making it a good choice for adventurers of their species to start in a dwarven civilization.

Some dwarves like leopard men for their spotted coats. 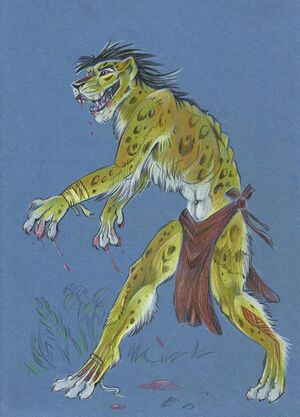 Not as cartoony in-game. Nor friendly.
Art by Taski Guru
Retrieved from "https://dwarffortresswiki.org/index.php?title=Leopard_man&oldid=286311"
Categories:
Hidden category: