A worm-like creature with the torso of a man.

Worm men are animal people versions of the common worm, who can be found in savage tropical, temperate and taiga regions. They spawn in groups of 1-5 individuals and are generally content to keep to themselves. In terms of size, they are a little over half the weight of the average dwarf. 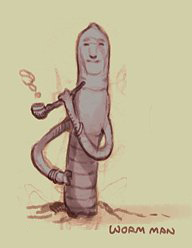 A drawing of a worm man and a pipe by Arne. All craftsdwarfship is of the highest quality. The worm man is smoking the pipe. The worm man is standing peacefully.
Retrieved from "https://dwarffortresswiki.org/index.php?title=Worm_man&oldid=285696"
Categories:
Hidden categories: