A person with the head and tail of an ocelot.

Ocelot men are animal people variants of the common ocelot who can be found in most savage tropical regions. They spawn in groups of 1-5 individuals and are generally content to keep to themselves. In terms of size, they are a little over half the weight of the average dwarf.

Some dwarves like ocelot men for their coat patterns.

Ocelot men are best known for their tendency to spin around (or revolve) while dual-wielding crossbows. They may spawn alongside Snake men, but whether they are hostile to each other depends on the version of the game. 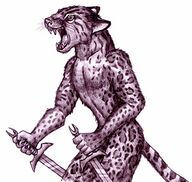 Might be tamable with fish.
Art by Palelady
Retrieved from "https://dwarffortresswiki.org/index.php?title=Ocelot_man&oldid=287050"
Categories:
Hidden categories: