Hedgehog men are animal people variants of the common hedgehog who can be found in savage temperate shrublands and savannas. They spawn in groups of 1-5 individuals and can curl up into a ball-shape which drastically increases the defense of the creature against blunt damage, causing it only to take damage to the upper body. In terms of size, they are a little over half the weight of the average dwarf.

Some dwarves like hedgehog men for their many spines.

As a result, the undead echidna may at the same time be curled-up (making it unkillable) and move/attack. The same problem also affects the echidna man, giant echidna and giant hedgehog. 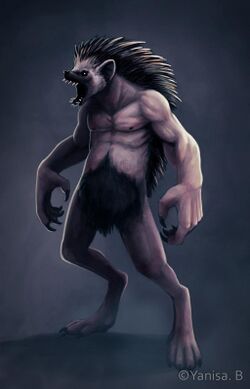