Harpies are fanciful, intelligent, female-only creatures found in many evil biomes. They spawn in flocks of 2-3 mayhem-minded individuals who will terrorize pastured livestock and attack dwarves who get in their sights (or at least are supposed to, but currently don't Bug:10031). Harpies are as heavy as the average dwarf and can cause severe damage to civilians, though they should pose no real threat to a squad of marksdwarves and even less to a metal-clad melee squad, provided they can hit and reach them. Harpies are immortal and only die to violence and disease. 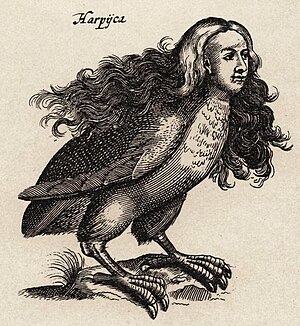