A huge monster the shape of a hyena.

Giant hyenas are extremely large, six times the size of an average dwarf, close to as large as a yak. Thanks to the [LARGE_PREDATOR] token they inherit from their basal kin, they're also extremely aggressive. Combined with their pack behavior, appearing in groups of five to fifteen individuals, giant hyenas are (unsurprisingly) extremely dangerous, and will rip apart an unfortunate dwarf faster than he can scream. Should not be approached without large and experienced military hunting parties in full armor; the proceeds of such a clash could feed the fortress for a while.

Some dwarves like giant hyenas for their distinctive laugh and their coordinated hunting. 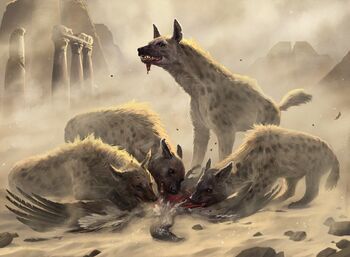 A Lovecraftian view of giant hyenas. Their laughs are even more horrifying.
Retrieved from "https://dwarffortresswiki.org/index.php?title=Giant_hyena&oldid=285360"
Categories:
Hidden category: