An orange striped person with the head of a tiger.

Tiger men are animal people versions of the common tiger, often inhabiting savage tropical forests and coastal/wetland areas. They are large, predatory carnivores that can present a significant threat to an unarmed dwarf, as they are over twice the size of the average human.

Some dwarves prefer tiger men for their stripes, of course.

In previous versions, elven merchants used to sometimes bring tamed (enslaved?) tiger men to trade. As they could not work, they had plenty of time to improve their social skills and could even become the mayor of a fortress. This was due to the combination of the Tiger Man's [PET] and [CAN_LEARN] tags; however, since the first one was removed in version 40.05, this no longer happens.

Tiger men prefer to consume meals made from flour, Dwarven sugar and milk when possible. Particularly tough, agile and strong tiger men may become brokers for this food combination, urging caravans arriving to your fortress to purchase it while profusely claiming it is great.

Some tiger men will form close bonds with blonde, mischievous dwarven children. The child will often own a red-colored minecart wagon, and have a fierce grudge with a brunette child of the opposite gender in your fort.

Other tiger men are capable building destroyers and tend to wreak havoc if they enter the elven home of a corresponding sloth bear man. Inexperienced tiger men readily consume honey from sloth bear men's stockpiles of glazed «+earthenware jugs+» despite their innate negative preference for it, leading to a negative thought. Some dwarves like tiger men for their tail-bouncing propagation. 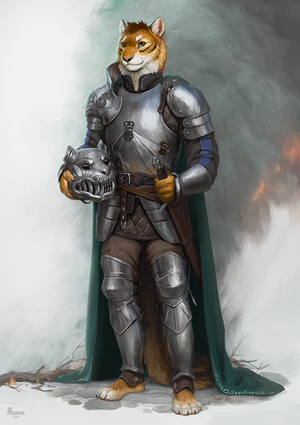