A large spotted feline found in grass and woodland. It is known for great speed in hunting.

Leopards are very rare animals found in tropical and desert biomes, where they spawn one at a time. Weighting a little less than a dwarf, these predators can kill an unarmed civilian if provoked, but shouldn't pose a threat to a military protection by metal armor. On top of low frequency rate, no more than 3 leopards will exist in a single surrounding before they're considered locally extinct. A newborn leopard is called a cub.

Leopards can be captured in cage traps and trained into exotic pets, and they're also sometimes brought along with elven caravans. They can receive additional war or hunting training as well, further increasing their potential, though their [MEANDERER] tag will cause them to move around very slowly, making them unreliableBug:9588. Products made from leopard parts, should you choose to butcher them, are worth thrice more than those made from parts of common animals. Leopards take 3 years to reach adulthood, though they're fully grown by the age of 2.

Leopards have a 10/1001 chance of having black hair, and a 1/1001 of having white hair, otherwise being spotted. Note that genetics apply to ones born in your fort, so a breeding program with a limited set of parents might not be able to give a non-spotted leopard, no matter the number of cubs. On the other hand, two non-spotted leopards will always give non-spotted offspring. 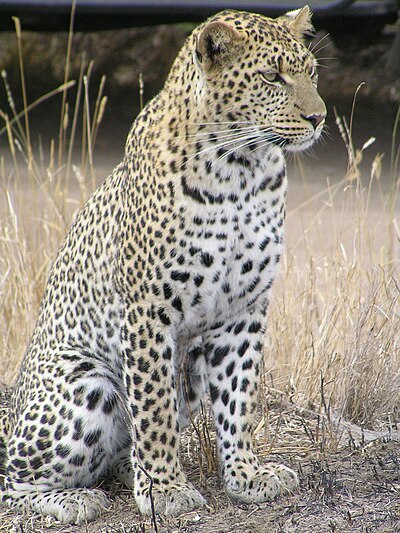