A person with the head and horns of a rhinoceros.

Rhinoceros men are animal people versions of the common rhinoceros, who can be found in savage tropical flatlands. They spawn in groups of 5-10 individuals and should never be approached by common peasants, as they rank among the largest of all animal people (being about as heavy as a hippo, or 25 times larger than a dwarf), and, as such, are easily able to tear an unsuspecting intruder apart. 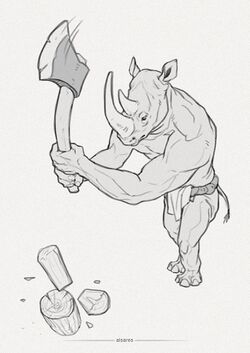 Why are rhino men such terrible businessmen? They always overcharge.
Art by AlsaresLynx
Retrieved from "https://dwarffortresswiki.org/index.php?title=Rhinoceros_man&oldid=287091"
Categories:
Hidden category: