Stranglers are very rare four-armed humanoid creatures found only in evil tropical moist broadleaf forests. They appear in groups of one to three and attack anything smaller than themselves. Despite being described as large, they are in fact smaller than dwarves, though they may still pose a threat to civilians who provoke them. While they have no real preference for strangling, they can and will scratch and bite their enemies. All stranglers are born with Legendary skill in climbing.

While they are humanoid in anatomy, stranglers aren't intelligent creatures. Despite being smaller than an adult sheep, stranglers produce twice the butchering returns, at twice the value, making them well-worth harvesting if they appear near your fortress.

Some dwarves like stranglers for their resounding hoots, their graceful leaps, their toothy maw and their three eyes. 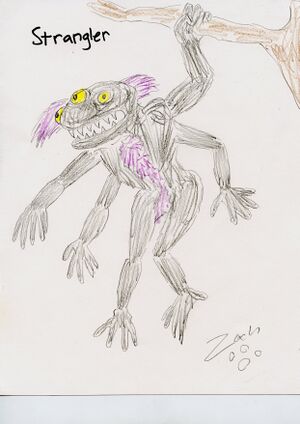