A gigantic version of its tiny cousin, this long, slimy creature tunnels through the rocks deep underground.

Giant earthworms are massive and fairly rare worms found in the first and second layers of the caverns. As heavy as a grizzly bear, these creatures will attack dwarves who provoke them with push attacks, and they are large enough for such attacks to cause heavy damage to unarmored peasants.

Giant earthworms have a pet value of 500, but lack the necessary tokens to be trainable. They give a significant amount of returns when butchered, and products made from them are twice as valuable as products made with normal animal parts, making giant earthworm hunting a profitable decision for a fortress.

Some dwarves like giant earthworms for their awesome presence. 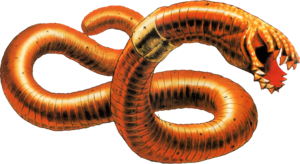 Some kids still get dared to eat them.
Retrieved from "https://dwarffortresswiki.org/index.php?title=Giant_earthworm&oldid=287302"
Categories:
Hidden categories: