A medium-sized humanoid with the horns and legs of a goat.

Satyrs are fanciful, intelligent creatures found in certain good-aligned forests. Standing at the size of a dwarf, these goat-legged creatures spawn rarely, in groups of 3-5 individuals who will do little else but wander the area aimlessly. If approached by a fortress' inhabitants, satyrs will flee rather than pose any threat unless cornered, in which case they will fight with punches, kicks, scratches, bites and by goring the enemy with their horns. They are a male-only race - no female satyrs exist - and are also immortal, only dying to violence.

Satyrs are sapient and can open unlocked doors, though they will rarely do much else than accidentally get caught in traps. They are capable of speech and can be spoken to in adventure mode, though they will likely not have much to say. Satyrs possess a pet value of 250, but lack the necessary tokens to be trainable (and even if modded to be trainable, the fact they are intelligent creatures will lead to strange behavior).

Their evil counterparts are the foul blendecs.

In mythology, satyrs were traditionally depicted as young men with the ears and tail of a horse. Satyrs in Dwarf Fortress are more akin to a different class of being entirely: They're fauns, you dork. 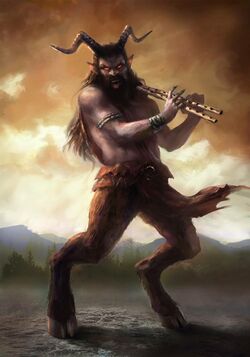