A small underground monster that crawls across the cavern wall with its four clawed hands. It has a single large eye which can shine with its own light, otherwise its stony skin blends in with the rock. It has no mouth and is said to feed on evil alone.

Creeping eyes are small, four-armed evil monsters that can be found in the deepest caverns in large packs. They have no attacks whatsoever, apart from the standard push attack, but they are so small they will rarely ever hurt a dwarf.

Drowning chambers do not work on creeping eyes, as they have [NOBREATHE]. The same 5 z-level pit trap, capable of killing dozens of blind cave ogres with assembly-line efficiency, doesn't even damage these hardy creatures. Your best bet is your military, even though creeping eyes have a lot of excess targetable body parts and only one weak point: the heart.

Creeping eyes possess a pet value of 50, but lack the necessary tokens to be trainable. All creeping eyes possess Legendary skill in climbing and are biologically immortal, only dying from violence or disease. When encountered in adventurer mode, they will glow in the dark. They can't be spawned in the object testing arena.

Some dwarves like creeping eyes for their unnerving stare. 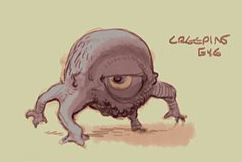 Interestingly, despite feeding on evil alone creeping eyes have intestines, implying that evil can be metabolized. Because of this, it is widely believed that bars of soap derived from the evil-saturated fat of creeping eyes is a powerful dwarven aphrodisiac (beard strengthener).