A striped person with the head and tail of a chipmunk.

Chipmunk men are animal people variants of the common chipmunk who can be found in savage temperate forests. They spawn in groups of 1-5 individuals and are generally content to keep to themselves. In terms of size, they are a little over half the weight of the average dwarf. 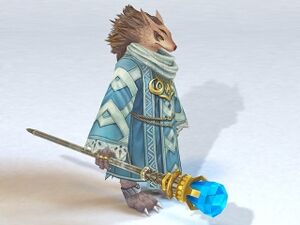 May have an annoying voice.

Chipmunk men have been known to form 3-man bard troupes.