A person with the head and tail of a lizard.

Lizard men are humanoid versions of the common lizard and a species of unremarkable animal people, found in many savage biomes. They are a little over half the size of dwarves when adults and spawn in groups of 1-3 individuals. They should pose no threat unless provoked. All lizard men are born with Legendary skill in climbing.

Like other savage animal people, lizard men may occasionally join civilizations, becoming full-fledged citizens who may appear in your fortress as visitors or be playable in adventurer mode. 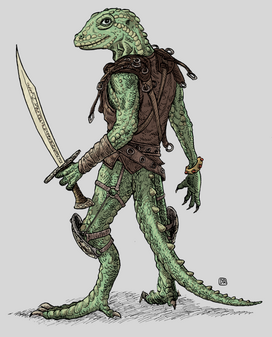 Some lizard women admire cave fish women for their sheer awesomeness, although they are unable to express it because of their natural timidness. They are also rumored to be connected to the origin of forgotten beasts, which puts even further strain on their fragile psyche.

Human peasants have been occasionally witnessed accusing their local lords of being lizard men, but all such allegations have been proven to be false.