Large rats are creatures commonly found in the first layer of the caverns, larger than a common rat but smaller than a giant rat. About the size of a kobold, these creatures will steal your food and drink your booze at every chance, meaning they should be kept away from your food stockpiles by all means necessary. All large rats are born with Legendary skill in climbing, and their infants are called large rat pups.

Large rats are benign and will flee from conflict, but dwarves will generally react violently to their presence, leading to them often getting beaten to a pulp by your peasants before they have the chance to cause any trouble. These creatures can be captured with cage traps very easily, as a food stockpile with a couple pieces of food can be used as lure. Once captured, they can be turned into fairly valuable pets, though due to their very short lifespan (no more than 3 years), they make poor companions to dwarves and are better off being butchered. 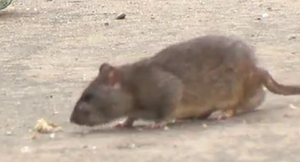