A small creature that lives in watery ditches deep underground. It has a sharp beak and four tentacles with claws at the end.

Pond grabbers are quite small tentacled, clawed, aquatic monsters found in underground bodies of water. They tend to hunt their prey in small groups of 3-5. They will generally leave you alone, but can wrestle and drown a dwarf startlingly easily. They also generally spend years in ponds, doing nothing and possibly blocking other, more interesting creatures from entering your caverns. It is best to defeat them at range with marksdwarves if possible.

Pond grabbers possess a pet value of 50, but lack the necessary tokens to be trainable. Things made from their parts, however, can still be requested from the dwarven caravan thanks to them existing at the first cavern layer. They are notably biologically immortal and only die from violence or disease. They can't be spawned in the object testing arena. 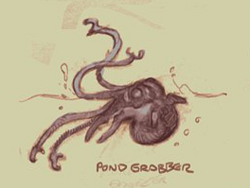