The largest of the giant cats. It can be found hunting alone in the most savage countryside.

Captured giant tigers may be tamed and kept as pets, trained for hunting or war, or bred as livestock for a meat industry. While they do not produce as much meat as some other "giant" creatures, giant tiger butchering returns are worth four times as much as those of common domestic animals.

Giant tigers are well-suited for military service, as they are by far the biggest of all the giant cats and breed relatively rapidly. Even untrained, giant tigers present a formidable defense for a fortress. As non-grazers, giant tigers don't require a pasture, and so need no special attention after taming.

Some dwarves prefer giant tigers for their large stripes, of course. 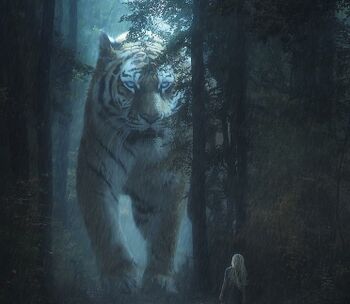 Not what they meant when they said, "Earn your stripes."
Retrieved from "https://dwarffortresswiki.org/index.php?title=Giant_tiger&oldid=285677"
Categories:
Hidden category: