A person with the head and tail of a red squirrel.

Red squirrel men are animal people versions of the common red squirrel, who can be found in savage temperate forests. They spawn in groups of 1-5 individuals and are generally content to keep to themselves. In terms of size, they are a little over half the weight of the average dwarf. All red squirrel men possess Legendary skill in climbing.

Some dwarves like red squirrel men for their tails. 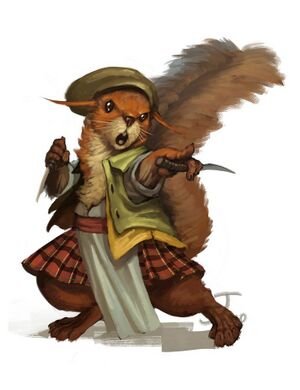 This squirrel is nuts!
Art by Leslie Castle

Red squirrel men do not commonly have "bad fur days". They are not known to date rabbit women twice their size. They are also not alcoholics.