A large ball of skin found moving around the debris near underground ponds. It is there that it absorbs dead matter for food.

The flesh ball is an amphibious creature, made entirely out of muscle and blood, that is quite slow on the ground. They appear in clusters of 2–5 in the third layer of the caverns and are as heavy as a human, but they are harmless to dwarves, possessing no means of attacking but a weak push which will glance away from just about anything.

Flesh balls are featureless, skinless and boneless. As simple balls of muscle, they do not need to breathe or sleep, have no thought, cannot vomit, become dizzy, or be stunned, but are still easily killable anyway. They produce two pieces of meat when butchered. Flesh balls possess a pet value of 10, but lack the necessary tokens to be trainable. They can't be spawned in the object testing arena.

Some dwarves like flesh balls for their warmth and their calming roundness. 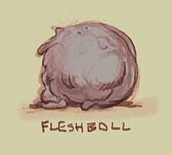