A large quadruped with a mane circling its manlike face and hands at the end of its forelimbs. It lives underground and is fond of raiding the supplies of cavern outposts.

Drunians are creatures who can be found on the first and second layers of the caverns. They spawn in loose groups of 5-10 individuals, walking into undefended fortresses, stealing items and eating all the food they can get their grubby fingers into. Drunians are near the size of the average dwarf, but will flee when confronted unless cornered, in which case they will fight back with bites and scratches which should not pose a threat to a military squad. All drunians are born with Legendary skill in climbing.

Drunians can be captured with cage traps and trained into low-value pets. They are long-lived and also rather explosive breeders, which makes them an attractive target for your meat industry. They reach adulthood at 2 years, and should preferably be butchered at that age for optimal returns.

Unlike most animals, drunians can't be spawned in the object testing arena. 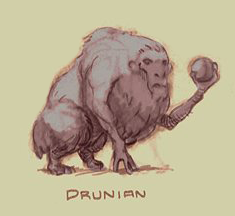