A large and mysterious ape-like creature found in temperate forests.

Sasquatches are large, fanciful, dangerous creatures found in savage temperate forests and taigas. They are fully capable of massacring dozens of unarmed dwarves due to their large size, and their disposition to destroy buildings will draw them into contact with fortresses, where they will topple furniture and wreck workshops in their path. Sasquatches can equip items and open unlocked doors, though the former is not typically seen in normal play and the latter is normally ignored, as the Sasquatch will simply destroy the whole door instead of opening it.

Sasquatches are exceptionally rare creatures and share their biome with dozens of other animals, making sighting them a very uncommon event. Even if you do encounter them, since they have a relatively low population number, no more than 5-10 Sasquatches will spawn before they become extinct in your biome. Despite their humanoid physiology, Sasquatches are not intelligent and your dwarves will gleefully butcher them into food and bones for crafting. Items made from Sasquatch parts are worth 3 times more than those of your standard domestic animals.

Sasquatches can be captured with cage traps, but cannot be trained. If the player doesn't want to butcher them for meat, their extremely long lifespan can make them valuable as permanent decorations for your fortress.

Also known as "Bigfoot" by the humans, the Sasquatch has been sought by fervent Cryptozoologists, a job title the tall ones made up. Despite several generations of camping out in the wild and being exposed to the elements of fun, the foolish humans never seem to be able to find one. Dwarves have killed and eaten (or been eaten by) many Sasquatches over the centuries, proving not only that Sasquatches exist, but that there is a thriving population to make them a viable food source, and that humans are stupid. A good day for dwarfkind, it is. 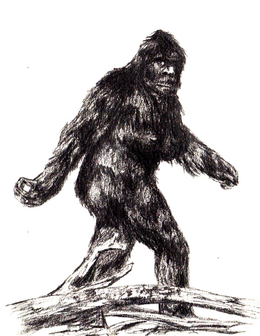