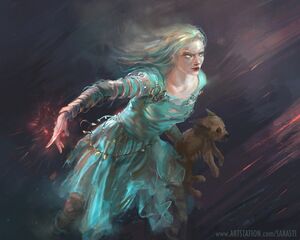 Intelligent undead are former historical figures, raised by necromancers to serve as lieutenants in their undead armies. Unlike zombies, intelligent undead retain their soul, and much of their original personality once revived.

They are relatively common – if you set your tavern to be open to all visitors, you are very likely to host a few guests of the intelligent undead variety. Despite their scary-sounding names, these are not hostile and will behave as any guest would.

Graphically, sprites of intelligent undead will show as humanoids with light blue skin.

The phrase "intelligent undead" does not actually appear within the game. Instead, each kind of intelligent undead receives a procedurally-generated name, composed of two parts. The first part alludes to it being undead (e.g. "putrid", "risen", "grave") or its nature as a night creature (e.g. "night", "grim"). The second part is always a noun, and sometimes describes it as being undead (e.g. "zombie", "ghoul") but just as often simply makes it sound threatening (e.g. "one", "slayer", "butcher", "stalker").

Each type of intelligent undead is given a set of 1-5 magic powers, with the possibility of acquiring more if they are raised multiple times by different necromancers. Undead may target themselves with their own powers, which has niche applications. The following powers have been reported:

If you happen to have a necromancer among your citizens, they may very well revive some of your recently fallen dwarves as intelligent undead if they are nearby and involved in combat. Unlike run-of-the-mill zombies, they will not be hostile and will eventually re-petition for citizenship in your fortress. Intelligent undead are impervious to stress and emotions – any event in their Thoughts and Preferences screen will cause them to "not feel anything". However, they inevitably become Distracted due to unmet needs, despite performing most of the jobs (Worship, Socialize, Read etc.) that should fulfill those needs. Intelligent undead children are immune to this distraction.

The intelligent undead can still make friends and be involved in relationships and will retain the ones they had when they died. (The only exception is that marriages do end upon the death of one spouse, and if resurrected their relationship status will be reset to "Friend".). If, for some reason, an intelligent undead was pregnant at the time of its death, the baby will be lost, as pregnancy is reset at the death of the creature.

Intelligent undead do not need to eat, drink, or sleep and can function normally despite very severe damage, such as a brain and skull "mangled beyond recognition", providing excellent practice for your medical dwarves. They do not age, reproduce, or gain or rust physical attributes (but do still gain or rust skills), and count as [NOT_LIVING], so other undead will be neutral to them. They also have many of the immunities undead have, such as [NOEXERT], [NOPAIN], [NOBREATHE], [NOSTUN], [NONAUSEA], [NO_DIZZINESS], [NO_FEVERS], [PARALYZEIMMUNE], [NOFEAR], [NO_THOUGHT_CENTER_FOR_MOVEMENT], [NO_CONNECTIONS_FOR_MOVEMENT] and [EXTRAVISION]. They also cannot bleed to death. This, in addition to the magic powers granted to them when they were raised, makes them very useful assets to your fortress. Lastly, as a consequence of them not aging, any intelligent undead child will remain a child for eternity (even after becoming 18 years old, the in-game trigger will not remove the Child token)

It is possible for those who have contracted a were-curse to be resurrected as intelligent undead; those that do will retain the curse on their undeath and will transform on a monthly basis according to the date they were originally bitten/turned.

Intelligent undead only require a center of mass. Therefore, you can raise headless creatures or butchered skin as intelligent undead. You can also raise your own severed head as a zombie, if you are playing as an intelligent undead necromancer – bonus points if you pet it once in a while and wonder "to be or not to be".

Necromancers may also raise invaders as intelligent undead. They may be hostile, even against the necromancer who created them, or marked as "Friendly" and sit around doing nothing – this is because many of the loyalty links the creature had are retained. For this reason, do not attempt to raise an enemy you have slain in adventure mode as an intelligent undead – they will remember they're your foe, and will attack you. To avoid this in adventure mode, you can destroy someone's soul by first raising a corpse as a non-intelligent undead. This rewrites their faction and soul traits, and any subsequent resurrection will raise them as a soulless creature loyal to you. This is very useful when you are in mass combat. 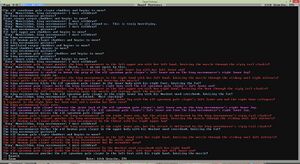 A necromancer animates the corpses of some invading elves as intelligent undead, with the procedural name "pale slayer". They immediately turn on him. 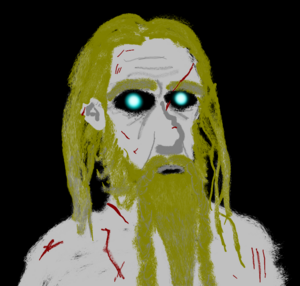 Goden Dedukoshur, the undying overseer, was a forlorn ghoul raised in 153, legendary warrior and militia commander, it participated in many raids until it faded away, haunting the fort in 158. Eventually, dwarven ingenuity brought it back to a fleshy form, and it rules Smallhands' military since then (full story).
Art by Nogoodgames