A small cat-like creature found in the jungle.

Ocelots are very rare animals found in a number of tropical biomes, from forests to mangrove swamps, where they appear one at a time. Weighing less than half the weight of a dwarf, these carnivores are only a real threat to your smaller domestic animals. On top of low frequency rate, no more than 3 ocelots will exist in a single biome before they're considered locally extinct. A newborn ocelot is called a cub, and all members of the species are born with Legendary skill in climbing.

Ocelots can be captured in cage traps and trained into exotic pets, and they're also sometimes brought along with elven caravans. They can receive additional war or hunting training as well, making them equivalent to war dogs in capabilities, though their [MEANDERER] tag will cause them to move around very slowlyBug:9588. Products made from ocelot parts, should you choose to butcher them, are worth twice more than those made from parts of common animals. Ocelots take 3 years to reach adulthood, though they're fully grown by the age of 2. 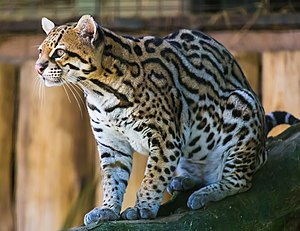 Admired for its coat patterns.

Ocelots are not easily tameable with fish, nor are they able to scare away green-colored explosive creatures.

Ocelots have nothing to do with revolvers or snakes