A person with the head of a tapir.

Tapir men are humanoid versions of the common tapir and a species of unremarkable animal people, found in savage tropical most broadleaf forests. They are a little over twice the weight of a dwarf, and therefore should be approached with caution.

Like other savage animal people, tapir men may occasionally join civilizations, becoming full-fledged citizens who may appear in your fortress as visitors or be playable in adventurer mode.

As the animal person template does not remove it, tapir women produce milk.

Some dwarves like tapir men for their floppy noses. 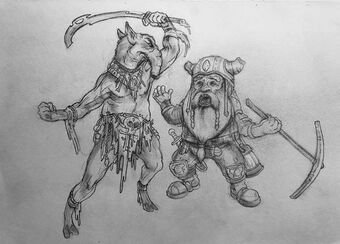