A humanoid made of mud which lives near water underground.

Mud men are extremely rare construct creatures made of solid mud, found exclusively at the third layer of the caverns. Like other construct creatures, they are non-sentient, feel no pain or fear, cannot be stunned and don't need to breathe. They are as large as humans and are level 2 building destroyers. Mud men are immortal and only die to violence.

Mud is not a particularly strong material, and even an unarmed dwarf civilian should be able to fight them one-on-one and emerge victorious with only a few bruises. An armored squad will make even quicker work of them, making them one of the less dangerous elemental men. When killed, mud men turn into a glob of mud which can't be used for anything. In adventurer mode, the player can smell mud men from a distance with o, with them being appropriately described as smelling like "mud".

Some dwarves like mud men for their peculiar smell. 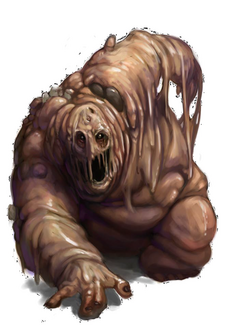