Cats are domestic animals, and one of the most common creatures in a typical dwarven fortress, spending their time killing vermin and creating messes for their owners to dispose of. They are fairly weak animals in combat (but combat can be quite random, and they have been known to surprise players on the rare occasion). They also seem to want to wander every room, hall and mineshaft at least once, perhaps due to some modeling of curiosity. Cats do not require any food, are born with Legendary skill in climbing and possess the [AT_PEACE_WITH_WILDLIFE] token, making them friendly toward most non-intelligent creatures.

Cats are useful around the fort to prevent the unhappy thoughts produced by vermin, and also for producing large numbers of kittens. If you can resist their cuteness and charm, and get to them before they adopt a dwarf, cats can be butchered to provide a small, never-ending trickle of leather, bones and meat for your fort. As a breeding pair of cats only costs 22 embark points, this is well worth considering - just cage and/or butcher the kittens as they are born, lest the kittens grow to adopt a dwarf before their last voyage (see Breeding).

Inspecting a cat with v reveals a unique message saying This animal isn't interested in your wishes. 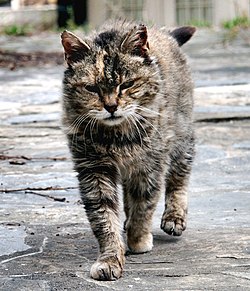 Admired for its aloofness.

Abnormally large cats "C" can easily be mixed up with a bronze colossus "C", whose effects on a fortress are a lot more "Fun" than a catsplosion.